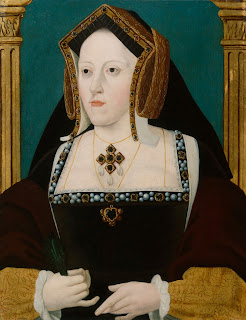 Sometimes myths and misconceptions about the Tudors are so well-entrenched that they often gain the status of "truths". I've seen historians referring to Katharine of Aragon's "many miscarriages" in almost every book about the Tudor period but guess what, this is a myth.

Katharine didn't have MANY MISCARRIAGES. Six of her pregnancies are recorded - perhaps there were more, but we're talking about those that we know of. And none of them ended up in miscarriage!

Let's start in the beginning, Katharine's first recorded pregnancy and its outcome. On 31 January 1510 she gave birth to a stillborn daughter. It wasn't a miscarriage - a fully formed child was born dead towards the end of Katharine's pregnancy.

Despite the stillbirth, Katharine "took to her chamber" because her belly was still swollen and her physicians assumed she was still pregnant with another child. No baby was born - and no miscarriage followed.

On 30 September 1511 Cardinal Wolsey wrote that “the Queen is THOUGHT to be with child” but noting further was heard about her condition - this, perhaps, was a miscarriage. Or she wasn't pregnant after all.

In October 1513 the Venetian ambassador reported that Katharine "had given birth to a son". Nothing further is known about this boy, he probably died following the birth.

Another son was born to Katharine and Henry in November 1514. According to the Venetian ambassador “the Queen has been delivered of a stillborn male child of eight months to the very great grief of the whole court”.

On 18 February 1516 Katharine gave birth to Princess Mary - her only child who would live to adulthood.

In November 1518 Katharine was delivered of a stillborn daughter in the eighth month of pregnancy.

So when you look at the evidence, you come to a startling conclusion - most of Katharine's pregnancies ended in stillbirths, not miscarriages.
She perhaps miscarried in 1511 - but her pregnancy wasn't even confirmed.
at April 08, 2020